The big dream of Willy Van Wesemael and Monique Paelstermans, from Hofstade near Aalst, in the late 70s was to start a goat farm somewhere in the Pyrenees, where they could make goat cheese and cultivate a herb garden together with their children. Willy, as a child, was raised by nuns who taught them the basics of herbal medicine. This aroused his intrest and afterwards he never stopped learning and exploring.

Because of several issues, the idea to move to the Pyrenees was shot down, but they continued searching for a suitable location closer to home.

In 1981 the family rented a holiday rental in Bohan (Vresse-sur-Semois) to do some household chores, and to find some rest after a long ride in a stuffed van. One day, Willy and his oldest son John stumbled upon 'La Chiquetterie' an inn from the 19th century in Nafraiture. It was a condemned building that had been uninhabited for more than 7 years, where smugglers and dealers alike did business that may not see the light of day. The building, together with a hectare and a half of land, was for sale for a bargain price. Despite all the works that still had to be done to the property, Willy saw this as their biggest opportunity to realize their dream.

Willy and Monique contacted the owner of the property, but stumbled upon their first obstacle: he didn't want to sell to Flemish people. After a lot of pleading and his past as a paracommando, he finally succeeded to convince the owner. Willy And Monique bought the La Chiquetterie and together with their 6 children (Cathy, John, Anne-Marie, Marijke, Wim and Pieter) they started their adventure. In January 1982 the family welcomed a seventh child: Emily. 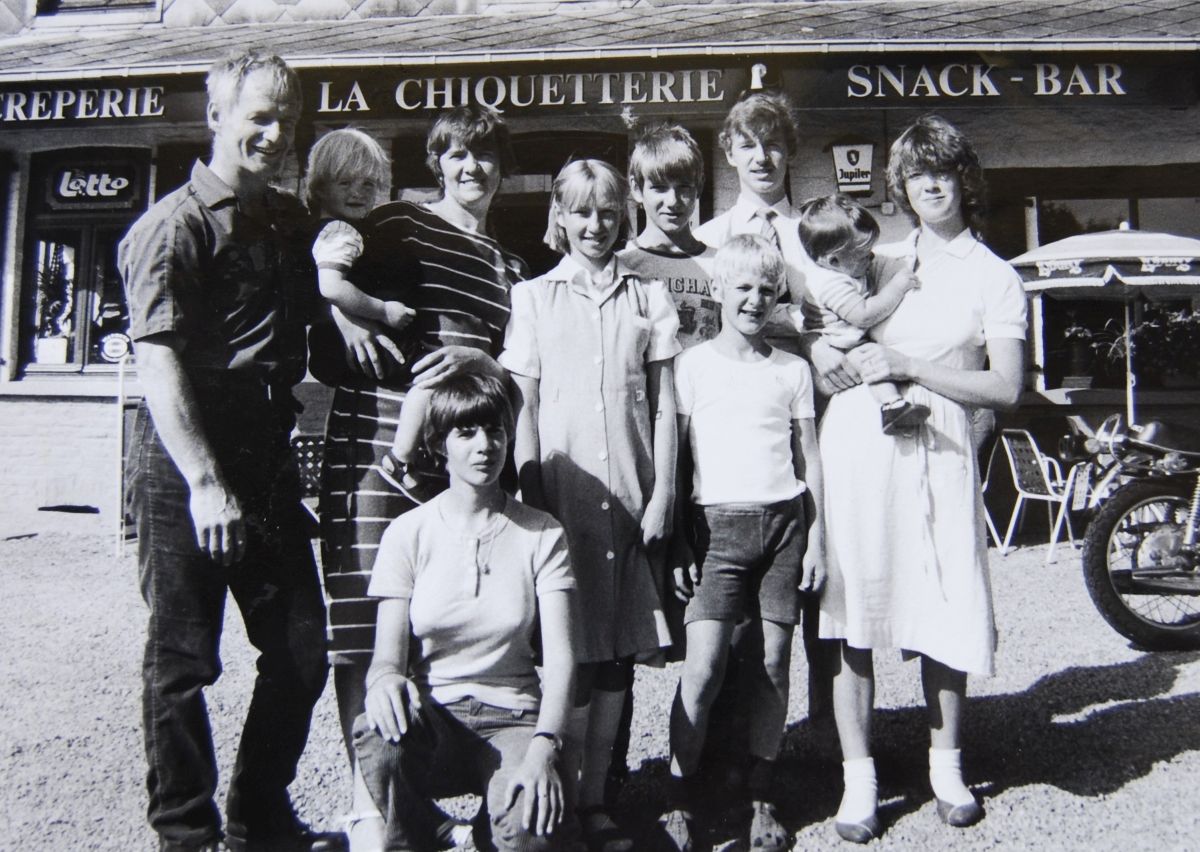 They had a very rough start. There was no electricity and the existing well couldn't provide sufficient water. Every now and then, they received some water from a local farmer, but also this couldn't last. The electricity company didn't want to connect the remote house to the power grid, and also the city didn't want to invest to connect the house to the water network.
Also the locals rather saw them leave. They were treated as gold diggers and scum. Even the mayor never gave any support. Also the children had a hard time at school. Eventhough the local school was saved from closure because of them, these children from Flanders were never given a warm welcome.

Despite the difficulties, the family didn't throw the towel, but kept looking for solutions!

They contacted every possible authority to have their house connected to the water- and electricity network. They even wrote a letter to minister Wathelet and King Boudewijn to help them out; unfortunately without result. So they decided to take their destiny into their own hands. With the help of a dowser they started looking for a spot on the land where there would be water. In the front meadow they drilled down 40 meters and found a well with drinkable water that could foresee their needs.

By installing an electric generator powered by gasoline, they finally had electricity in the house, which they had to use sparingly. At 7 in the evening, the alternator was shut down and candles were used to light the room.

It took until 1995 before La Chiquetterie was finally connected to the local water- and electricity network after paying more than 1 million Belgian Francs (25.000 euro).

To provide for themselves they cultivated their own vegetables and bred chickens and pigs. But this alone wasn't enough. To have another source of income they opened La Chiquetterie - their pancake house - as soon as possible.

The first customers were Flemish people from Linkeroever (Antwerp) and every now and then a casual passerby stopped for a pancake and a drink. However this was hardly enough to survive. Barely anyone from the local community came by, because of the large resistance against 'these people from Flanders'.

Everything for a reason

Things improved when 3 monk passed by and made a stop in La Chiquetterie. They were looking for a place to eat and drink something for 2 buses filled with pilgrims. Because of the crucifix that was hanging on the wall, they were convinced it was a sign of God that they had to come back to help this family with 7 children.

The crucifix was there for a reason. Pieter, the youngest son of the family, was allowed to select one thing from the previous owner's antiquities. Willy and Monique put the crucifix (that is still there) on the wall of the tavern, as a souvenir. Who could have guessed that this simple deed would turn out to be their salvation. The monks kept coming back with 3 to 4 buses every month. They had a lot of sympathy for the family that had a hard time to survive, and for that reason every time they came, they brought extra things from the local market. They also collected clothing, food and other necessities to help out the family in need.

In 1983 Monique contacted Martin De Jonghe from Radio 2 during the broadcast of his Sunday morning program 'Servicetelefoon'. She explained the problems she and her family had encountered over the last few years. A journalist from 'Het Laatste Nieuws' picked up the story, contacted them and published a large article: "Vlaamse koppigaard hield prachtig stand in Wallonië".

The publishing of this article ensured that a lot of curious Flemish people found their way to La Chiquetterie. It was a big relief after two hard years.

In 1984 Willy started organizing guide tours in the herb garden, which drew additional clientele to La Chiquetterie. At that time he had about 60 different herbs in his garden.

With these herbs he took his first steps towards brewing his own liquor. With vodka from Aldi and herbs from his own garden he created Elexir the Nafraiture. The Elixir was really appreciated and and provided an extra source of income for the business.

Even though Willy had a vast knowledge of herbs and brewing the Elixir, he didn't have the slightest idea which rules he had to follow to comply with the law when brewing and selling liquor. When he got an audit from the tax service, everything was about to fall apart.

The auditors noticed that Willy and his family didn't have any bad intentions, so they were prepared to guide them to take the necessary steps. This way he could produce the Elixir in a legal way. For three years, auditors came by regularly to help out Willy with the whole process.

With a new name, a few changes to the original recipe and completely in accordance to the law, the first bottle of Elixir the Vresse was bottled in 1987. A successful liquor of which yearly about 1500 bottles are sold.

The auditors also noticed Willy's large knowledge of herbs. They advised him in 1987 to start making mother tinctures.

Pancake house to wild herb garden and so much more

La Chiquetterie has become the herb garden of Nafraiture with about one thousand different herbs and trees that live and grow in perfect harmony and where you everyone is welcome for guidance and advice about the use of medicinal herbs.

They have their own home made liquors, mother tinctures, syrups and so much more. The goat farm has grown to about 60 goats that provide the milk for delicious goat cheese. Every day there is freshly baked bread, and the chickens make sure there are always eggs to bake pancakes.

In the beginning only Flemish people were coming to La Chiquetterie, but along the way the family Van Wesemael won the trust of the locals. In the mean time they are fully accepted in the community. Still a lot of people from Flanders are coming, but they are not the only clientele anymore. Wallonia, Flanders, Europe, the world, ... everybody is welcome.

From the beginning the business has be a real family company. When the kids didn't have to go to school, then were helping out. John served the customers in the bar, Kathy and Anne-Marie were helping out in the kitchen. Wim and Pieter maintained the garden and took care of the goats. Marijke liked to dive into the herbs and their use, and Emily followed in her footsteps.
As the children became older, got married and got children of their own, some of them went their own way, other stayed in the business.

For almost 40 years Willy and Monique have made La Chiquetterie to what it is today. Over the past years they already transferred a lot of things to the children that were still active in the business. Marijke is at the head of the herbal products and their development. Emily takes care of sales and tours of the garden. Together they fulfilling the orders, serving the customers in the bar a refreshing local beer or an Elixir de Vresse and advising them on the use of the herbal products. Anne-Marie is helping out in the kitchen making coffee and herbal tea, as well as baking their famous pancakes. Wim is taking care of the goats, makes the goat cheese and bakes the bread.

In 2019 a new chapter has arrived as Willy and Monique decided to pass the torch irrevocably to their children. Emily Van Wesemaal, the youngest daughter officially took over the business. Together with her sisters Anne-Marie and Marijke and her brother Pieter, she will continue the family business, and she's full of ideas to grow the company even further.
And have no worries, Willy and Monique will never be far away.

Annual leave: from 20 to 30 September